December 14, 2015
In a world where the media convinces us we are all under attack while dog pictures and fail videos cover our social media channels instead of the world struggles we try to avoid everyday, it’s hard to find humanity, dignity and benevolence anywhere. Maybe you feel that you are looking in the wrong places, but then when you look at your family (whether it be your husband, girlfriend, parent or nephew), they are all staring down at their smartphones and, if you’re lucky, they’re half paying attention to what you need to say.

It’s become a world that simply accepts carelessness and little attention to detail. It’s as if humanity has been replaced by selfishness or malevolence.

Just six months ago, I would have told you that this was the way the world was completely trending and we just need to accept that humanity doesn’t live here anymore. My recent dealings have proven this theory incorrect, though.

As most of my social media following knows, my father, Stan Ponder, Sr., was diagnosed with myelofibrosis and myelodysplasia — two rare forms of leukemia — in July. I won’t get into what these diseases do to the body; instead, you can read about them here and here.

As my parents were still reeling from a tornado that struck their house in May 2013, this was quite the shock emotionally and financially. I set up a GoFundMe page for my dad, putting up a prayer that anyone would be willing to help. I prefaced this act by telling my mom, “Don’t expect much. I have no idea how willing people will be to help one person.”

The response resulted in every positive emotion you can imagine. I remember texting my father three hours after the page went live and telling him, “We have $700 in three hours!” He was exasperated at the public outpouring of support.

For months, people continued to donate, many coming with personal messages to Stan and the rest of us. The support was tremendous and made every member of the Ponder family proud to be associated with so many great people.

Stan entered the hospital in early November to receive a bone marrow transplant, which included a long recovery process that was sure to produce multiple hardships. He received the transplant on Nov. 10 and everything was looking up.
Unfortunately, Stan’s body was having trouble accepting the multiple chemotherapy treatments that was needed in his condition. His heart was unable to fight on and the man I most idolized lost his battle with leukemia on Sunday, Nov. 22.

Needless to say, this event was difficult on me, my siblings and my mother. It was something that made me want to crawl into a hole and forget about my human existence for some time.

Luckily, I am surrounded by wonderful people. My family, of course, leaned on each other for support (still ongoing). Beyond that, I can’t even begin to tell you the amount of text messages, emails, Facebook messages and tweets I received in the ensuing days. Of course the obligatory If there’s anything I can do … statements were rampant, but it simply felt different than what you might expect.

These felt genuine and heartfelt. I truly believe that I could have called any one of these people and they would have been there in a moment’s notice to do whatever it is I may have needed. I simply was not in a state to respond to most of these, so if you are reading this, please take note that I was truly touched and I can’t thank you enough for what you did for my family and me.

Meanwhile, the donations continued to trickle in one-by-one, each one helping my mother pay extensive medical expenses and just general living costs, as social security has revealed a major hole in its policies for when spouses lose their loved ones.

In the same boat are the people who contributed to the hockey tournament/fundraiser held on the weekend of dad’s passing. Played at Matteson Tri Plex in St. Peters, the tournament was a massive hit as the silent auctions and raffles, along with the player fees, went a long way in paying Stan’s medical bills. This goes without saying the countless people who came simply to watch, show support and share memories of Stan to keep the spirits high.
These generous displays are constant reminders that humanity is still alive. It may not be as prevalent as we wish, but it shows when people need it most.

Nobody knows that better than Stan himself.

Yes, some people want to show support simply because they know there are others in need of it. But many have been so kind and caring because of the man my father was.

If his teenage sister-in-law needed a place to stay because of a sour homelife, Stan provided not just shelter, but a home. If his 14-year-old son wanted a set of left-handed golf clubs, he would scour the St. Louis area (long before the days of Amazon or craigslist). If his other son needed to lay tile, he was there with a saw and grout first thing in the morning.

This generosity didn’t just exist for family, either. Stories of dad’s unselfishness poured in after his passing.

From building fences that surround entire properties without asking for anything in return to dressing up as Santa Claus on Christmas and surprising not only his own kids but the neighbor children, Stan never stopped pleasing others.

It didn’t stop when he became ill, either. One of the side effects of his condition included being extremely short of breath and feeling chest pains, especially in extreme heat and strenuous activities. This didn’t stop him from mowing his 70-year-old neighbor’s lawn in a St. Louis August. When confronted about it and asked why he would put himself in danger like that, his answer was as typical as anything he did: “If I don’t do it, who will?”

It wasn’t always a story that everyone remembered about dad, though. Maybe it was the weekly phone calls he made to convince you to continue to help coach your kid’s hockey team, or maybe it was a conversation he had with you that was riddled with dirty jokes and continuous laughter, or maybe it was simply the nickname he gave you (“Sludgeboy,” “Goathead” and “Lumpy” to name a few) — Stan always had a way of making sure you enjoyed your time with him as much as he probably enjoyed you. No matter who you were, he always had a way of making you feel special.

Imagine that feeling if you were his son. Sure, there were forgettable moments, but who doesn’t have that with their parents? But the good memories, and there were a lot of them, have definitely lasted through the test of time.

His laughter when I got a doughnut from St. Louis Blues announcer Ken Wilson. His co-workers approaching me with praise weeks after I scored my first ever hockey goal. Hearing his commentary while I played Arkham Asylum, although always telling me he didn’t care to play or watch video games. Him putting his pants on his head at dinnertime and dancing around (no context needed).

Mostly though, I remember the conversations. The laughter. The moments where discussions for most people ended with “I love you, dad,” but instead ended like any other conversation because our relationship was simply understood.

I carry dad with me in everything I do. I realize now that his sense of humor and his charisma was passed on to me (although maybe the tact was passed over). I try to make those around me have better days and enjoy life just a touch more. I hope the goodwill and kindness that dad shared is passed on to not only me, but to all of his children.

One evening in the hospital, dad was visited by multiple family members at once. We gathered in the meeting area of Barnes-Jewish as dad sat in his wheelchair with his mask on (to avoid any foreign agents entering his body as his immune system was weak during chemotherapy). A stranger sketched a picture of dad and, since this man simply saw the tremendous gathering of his kids and grandkids, he titled his drawing “A Well Loved Man.” It’s a phrase that has been uttered since dad’s passing as this stranger could not have captured a more perfect phrase than what he chose.

If you look deeper, though, you will find that the title can easily be reversed and still explains Stan to a T: “A Man Who Loved Well.” As his family, we never wondered where we sat with him. You just knew.

And as he left this world with his family standing around him and sharing stories about his loving nature on that fateful Sunday, we can’t help but believe that in his last breath, he just knew that the very love he showed us for all those years was reciprocated in every way possible. He knew that he touched our lives so much that he will be with us until our last breaths.

He knew he was the most influential, respectable and well-loved father that I could have ever asked for.

Popular posts from this blog

Why You Shouldn't Bank with BMO Harris

Before I get started, let me clarify one thing: I am not one to go on social media and blast a company. I am not one to get on the phone with a representative and curse them out or tell them off in any way. In fact, I have even received gift certificates and such because I am so easy to deal with (or at least that's what I am told at the end of the conversation). Needless to say for anyone who knows me, it takes a lot to get me riled up. One bank has found a way to achieve this honor, though. Before we discuss the ineptitude of BMO Harris, let me tell a quick (or not-so-quick) backstory on why I am dealing with this bank in the first place. Also, I should clarify that any legal discussion included in this post is how I know and have been told the law; I am not a legal writer nor do I have any type of background in state or federal law. It all started two years ago when I was living in Dallas, Texas (I now live in my hometown, St. Louis, Mo). I bought a Kia Soul and was fin
Read more

The Decision: I am Leaving Blues Media 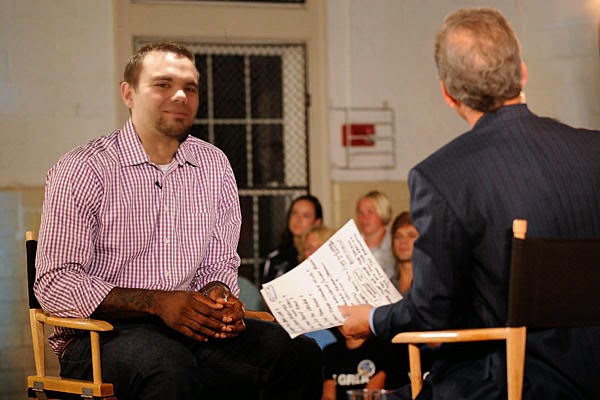 Since I was 15-years old, I knew what I wanted to do. I loved English class, I loved to write and there was only one thing I knew I loved more than both of those things: hockey. Anyone who knows me knows my passion for the game and how it has completely controlled my life. I wanted to be a hockey reporter. I wanted to be that trusted face that other hockey lovers would turn to for news, analysis and even some humor when things aren’t going that fan’s way. I turned 30 on Saturday. That means that half of my life was spent with this dream. Now, it’s time to move on to other things. Let's not make too big a deal out of this. I have decided to discontinue my position with InsideSTL / CBS Sports Radio 920 and leave St. Louis Blues media. Believe me, this was one of the most difficult decisions I have ever had to make. I’ve had so many people follow me along this journey and use me as a source for Blues information, whether it be analysis of the team’s play or the ne
Read more